Superman #75 and The Death of Superman Receive Special and Collected Editions On-Sale Nov. 1 and Dec. 6

30 years ago, the unthinkable happened. The Man of Steel died fighting Doomsday.

To celebrate the special anniversary of this genre-defining moment, DC has reunited the original creative teams of Dan Jurgens and Brett Breeding; Roger Stern and Butch Guice; Louise Simonson and Jon Bogdanove; and Jerry Ordway and Tom Grummett for The Death of Superman 30th Anniversary Special #1. Available at comic shops on November 8, The Death of Superman 30th Anniversary Special #1 features four all-new stories that explore the lasting impact that Clark’s death had on his family and friends as well as nine pinups and variant covers by some of the top names in comics.

Each of the original creative teams from The Death of Superman has reunited to tell a story that shows how some of Superman’s biggest allies reacted during and after his fateful battle with Doomsday:

“Even now, thirty years after “The Death of Superman” first came out, every single convention or store appearance I do has at least one person who comes up to me with Superman #75 or the first “Death of Superman” collected edition and says, “This is the book that got me into comics. And I’m still here, reading, all these years later.” Most times, it’s more than one. Sometimes, multiple people arrive at my table at the same time and share their memories, which is always fun to experience.

Their tales are often quite similar. Typically, media coverage of Superman’s death compelled them or a parent to drop by a local store to pick the issue up. In some cases, their parents let them skip school the day of the book’s release so they could stand in line to get a copy. Some talk of how their store was sold out and they spent days looking all over town to find one.

I’m not alone in that experience. It’s common for the entire team of writers and artists who worked on Superman at the time. It was a singularly unique moment in comics, when a particular story was covered by every form of national and local media alike.

It’s hard to tell people what those days were like, but every comic shop in the country had long lines of people outside the door waiting to buy THAT BOOK.

All these years later, it’s a great pleasure to get back together with the story’s original creative teams to celebrate a truly exciting time in comics. For those of you who remember those days, The Death of Superman 30th Anniversary Special will reignite some memories. For those who weren’t around to experience it, well…we hope you get a hint of what it was like.

Most of all, we hope all of you enjoy reading it as much as we enjoyed putting it all together.”

For more details on The Death of Superman 30th Anniversary Special #1 from Dan Jurgens, you can read his interview with DCComics.com from San Diego Comic-Con.

Highlighting the milestone, The Death of Superman 30th Anniversary Special #1 will feature variant covers by artists including Jim Lee and Scott Williams; Dan Mora; Ivan Reis and Danny Miki; Francesco Mattina; Dan Jurgens; and Brett Breeding. Fans can also order a premium polybag variant that features a black armband with The Death of Superman 30th Anniversary logo and the main cover inside.

The Death of Superman 30th Anniversary Special #1 will be available at comic shops on November 8 and fans are encouraged to order by FOC on Sunday, August 28, to ensure they are able to receive their copy.

THE DEATH OF SUPERMAN 30TH ANNIVERSARY SPECIAL #1
30 years ago, the unthinkable happened. The Man of Steel died. After sacrificing himself to stop the unstoppable global threat, Doomsday, Metropolis and the rest of the DC Universe mourned the loss of their greatest hero. To mark this monumental moment in comics, DC has reunited the complete creative team behind the original event for four brand-new stories. Led by Dan Jurgens and Brett Breeding, the special kicks off with a new Superman story and villain…DOOMBREAKER! Followed by a series of short stories revisiting some of Superman’s greatest allies and exclusive pinups done by some of comics’ greatest artistic talent including LEE WEEKS, GABRIEL RODRIGUEZ, BILL SIENKIEWICZ, and WALTER SIMONSON.

DC had previously announced details of The Death of Superman 30th Anniversary Deluxe Edition, which will include Superman: Day of Doom #1-4 for the first time ever and will be available at comic shops and local bookstores on December 6, 2022. DC will also be releasing Superman #75 Special Edition featuring the original story by Dan Jurgens and Brett Breeding, which will be available at local comic shops on November 1.

SUPERMAN #75 SPECIAL EDITION
Superman and Doomsday go toe-to-toe in Metropolis and the Man of Steel falls! In 1992, the Death of Superman shocked the world and changed the DC Universe forever. Now’s your chance to own a piece of comic book history in a special edition featuring the iconic tale and interviews with the original creative team just in time for the 30th anniversary! 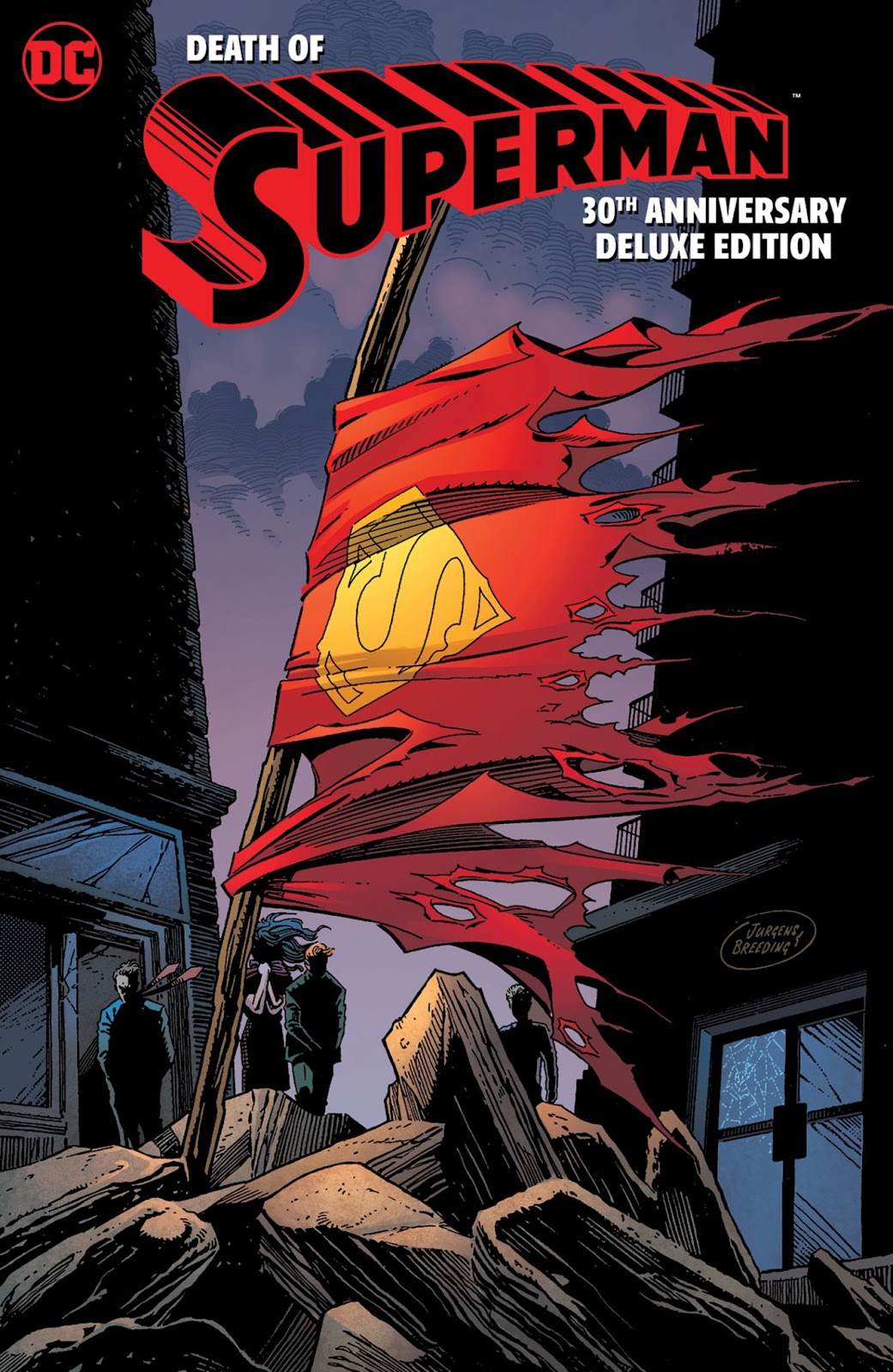 THE DEATH OF SUPERMAN 30TH ANNIVERSARY DELUXE EDITION
It was a day that no one ever dreamed would arrive: the day an unstoppable force met an immovable object. In Doomsday, Superman met his ultimate match—and his death! Relive the monumental event in this 30th-anniversary deluxe edition of the Death of Superman saga, featuring a new introduction by Dan Jurgens and other extras. This volume collects Superman #73-75, Adventures of Superman #496-497, Justice League America #69, Action Comics #683-684, Superman: The Man of Steel #17-19, and Newstime: The Life and Death of Superman #1—plus Superman: Day of Doom #1-4 as a bonus tale!

For the latest information on The Death of Superman 30th Anniversary Special #1, visit the DC website at www.dccomics.com and follow @DCComics and @thedcnation on social media. The DC UNIVERSE INFINITE digital subscription service is your one-stop spot for a host of classic and memorable stories featuring Superman; for more information and to subscribe, check out the website at www.dcuniverseinfinite.com.